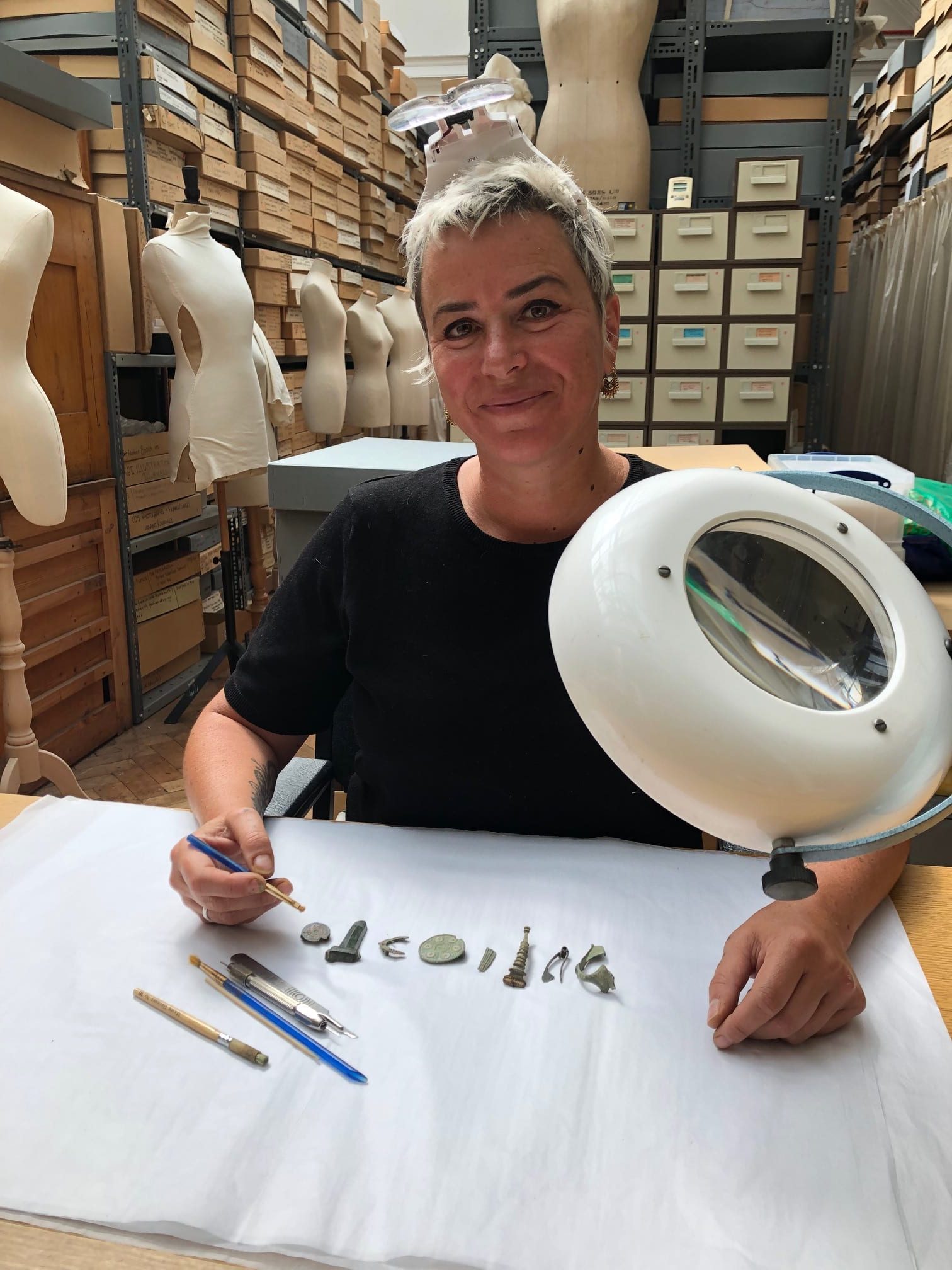 Hello, I’m Carola and I’m a graduate in Conservation of Historical Metalwork. I’ve joined Worthing museum for two months, conserving some of the beautiful objects both in the stores and on display.

My main area of interest is archaeological conservation. Every object is a discovery and by collaborating we can piece together the stories of how people lived right here, on the South Downs, throughout history.

Searching through boxes in the metals store labelled with familiar place names; Findon, Chanctonbury, Amberley, Ringmer – Curator of Archaeology James selected pieces excavated from the Downs north of Worthing which all needed cleaning and stabilising.

The objects are all made from copper alloy. They include various types of Roman brooches, a Roman object (possibly a belt buckle cover) and a 10th century Anglo-Scandinavian stirrup mount with niello inlay. Niello is a black mixture, usually of sulphur, copper, silver and lead.

There were 11 brooches in all, in varying condition, including a fibula and four enamelled pieces. One of them was in very good condition with the glass still in its original colours, and the other three still had some slightly degraded enamel in place.

I assessed the objects, some had developed loose corrosion which needs further investigation. They all needed soil removed, which is done very carefully – I prefer to remove as much as possible dry. My favourite tools for this are a soft brush, bamboo skewers, pin vice and a scalpel, going very gently in case there are details under the soil which aren’t initially evident. For any soil which couldn’t be easily removed I used a 50:50 solution of industrial methylated spirits (not the purple stuff!) and de-ionised water, swabbing the soil residues away.

I took great care with the enamelled brooches. The enamel had degraded in places and in one brooch the copper and enamel had corroded completely.  Using my conservator super powers I made a conservation plan, beginning by gently removing the loose corrosion using a scalpel. For this stage I had to be careful not to remove any detail hidden in the corrosion, gently returning the surface to the level it would have originally been. None of the objects required consolidating or treating for bronze disease, so the final stage was to coat the completely dry objects in a conservation lacquer containing benzotriazole. BTA is a chemical which arrests and guards against corrosion in copper, protecting the object long term from the environmental causes of corrosion.

There were a couple of challenging pieces in this collection, which had been treated historically with olive oil. Unfortunately neither of those pieces can be effectively treated due to this, and I will be posting another blog soon, discussing the scientific basis for not coating archaeological metal in olive oil!

Why use the term ‘copper alloy’?​

An alloy is a mixture of metals. When combined they make substances with improved properties like strength or hardness – making them suitable for specific purposes.