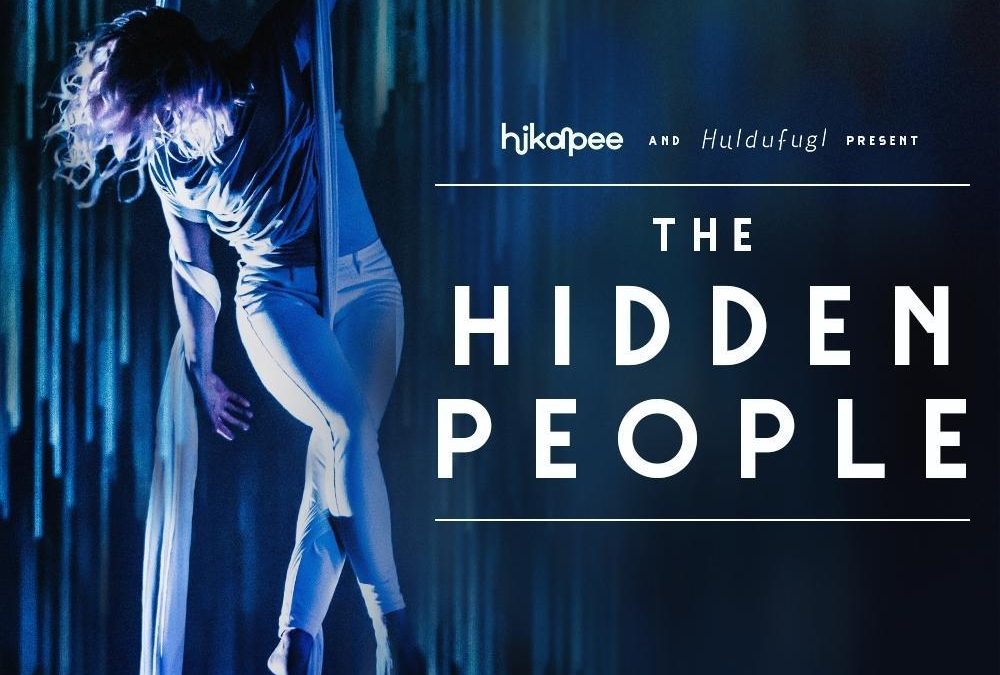 Hidden People, using aerial circus & creative technology performance, tells the story of a female architect who’s faced with the controversial task of building a hydroelectric dam in the Icelandic highlands. Under extreme pressure, she starts sensing a presence of something, or someone around her.

With the show coming to the Pavilion Theatre, Sat 12 March at 2pm & 7:30pm. We caught up with creators Hikapee, who are collaborating with Icelandic based company ‘Huldufugl’, to discover what led them to create this extraordinary show.

Where did the inspiration for Hidden People come from?

Edd and Bryony (the founders of Hikapee) travelled to Iceland on holiday in the summer of 2017 and met up with Nanna and Owen (the founders of Huldufugl). On a hike up a remote mountain in the Icelandic highlands, they came across a sign telling a local folklore story, next to a point of interest. Nanna then explained some of the folklore surrounding Icelandic hidden people, the “huldufolk”, and modern attitudes towards these stories. This sparked an interest in telling a forward-thinking story that included these hidden people, and how we could show their presence on-stage when they shouldn’t really be visible.

How did the story come to be told through aerial circus and creative technology?

Hikapee specialises in telling narrative stories through the use of aerial circus so that was the starting point. For this modern take on the hidden people, they wanted to use forward-thinking technology and play with light and shadow, creating the illusion that the audience is seeing something, or someone, on stage when it’s just a trick of lighting. For example showing footsteps that would then disappear and not have a physical body connected to them. They decided to go with projections to achieve this effect, but also to represent the dynamic and colourful Icelandic landscape. Huldufugl specialises in combining physical theatre with creative technology, and seeing as the idea had come up in Iceland whilst visiting Huldufugl the two companies decided to join forces and collaborate with a co-production.

What has it been like producing the show? Have there been any challenges?

We have been very fortunate to receive funding and venue support for all three of our rehearsal stages from various sources, including Arts Council England, Nordic Culture Point, Nordisk Kulturfond, The Finnish Institute, Jacksons Lane Theatre, Out There Arts, 101 Outdoor Arts, The Point and Worthing Theatres. However there have been plenty of challenges, the main ones being the increased waiting times for funding decisions due to Covid, the pandemic itself and added complications affecting our international collaboration due to Brexit. The first R&D took place in December 2018 and March 2019, and was split between Iceland and the UK. The second R&D took place in September 2019 and January 2020 and was split between the UK and Finland. The final creation was supposed to take place in late 2020, but when the pandemic hit then we were unable to apply for the funding we needed as there was no funding available for a long period of time.

When Arts Council England opened up for smaller grants we applied, and succeeded, in getting a grant to support a spin-off short film project for VR. This way we could still keep creating and keep our minds focused on the project instead of having a 2 year hiatus. This spin-off  project is a short animated piece for VR, made using aerial circus movement, captured with motion capture suits and supported by Target3D. We anticipate that we are able to tour the VR project along with the stage version once they are both fully realised. The final creation of the stage show is taking place from January to March 2022 in the UK, leading up to the premiere at Worthing Pavilion Theatre on 12 March.

At the time of writing – things are going smoothly, and we haven’t faced any major challenges during this final rehearsal process. There have been some minor illnesses but we are taking full precaution against Covid, such as all cast members taking lateral flow tests every other day. So far no-one has had to take a day off rehearsals! It is however stressful and challenging to plan rehearsals for an international production during such uncertain times. Our composer in Iceland sadly both got Covid and broke her arm on the same day so has been unable to join us in the UK for as much as we’d have liked.

All in all our timeframe is 2 years behind schedule, and in the meantime Brexit laws have been implemented, meaning that we now require a working visa for any non-UK nationalities involved in the project. That has both come with extra costs and extra production time that didn’t exist when we started this project. It was quite challenging to navigate what was needed to fulfil all requirements for a mid-scale theatre/circus performance. Fortunately we received funding from The Icelandic Embassy in London to cover some of these costs.

We are however extremely happy that we’ve been able to finalise the show after months of uncertainty, and we can’t wait to share the outcome with audience members in March!

The show explores the Icelandic folklore of the huldufolk (hidden people). Can
you go into more detail of what this folklore is and where it came from?

Hidden people are as real to most Icelanders as Santa Claus is to most British children, or ghosts to people of all ages. Hidden People seem to be more visible to children, but this belief lessens as they grow older. They are like a more evolved version of people, in that they look the same and dress the same, except advanced, around 50 years ahead of where we are today.

They can both be helpful or sinister, just like people, but also represent Icelandic nature as they live within rocks and mountains. In a way they have become a symbol for Icelandic nature, sort of like nature spirits, representing both its benevolent and dangerous sides. Weather in Iceland can be especially volatile, and change from glorious sunshine to freezing, and sometimes fatal, snowstorms in the span of only a few minutes. In a similar way, the stories of the hidden people can include anything from helping with childbirth to enticing people into certain death.

Stories of the hidden people have passed down generations to generations, dating back to the settlement of the country. There are two origin tales, both related to Christianity – Iceland adopted Christianity over Paganism in the year 1000.

In one of the origin stories Eve hides her dirty children from God that she had yet to give a bath, and God declares that “those who you hide from me shall also be hidden from men”. The children became invisible and retreated to the hills and rocks. In the other, the hidden people descend from spirits that were driven to earth and forced to live in the rocks and hills after they neither fought with the devil nor took his side when the devil revolted in heaven. In both stories it’s explained that the hidden people can only be seen when they choose to be seen themselves.

Most of the stories were written down in the 18th and 19th centuries and in them they mirror humans, except they are usually more beautiful, powerful, alluring and free from care whilst Icelanders at the time were often starving and struggling to survive. With time the hidden people have become stuck in this time in common view, they are still portrayed as living in turf houses and wearing 19th century national dress – whereas humans have moved on. If the stories had never been written down, then perhaps today the hidden people would be said to have better internet connection and faster, cleaner cars.

In this project, we really focused on the idea that in our modern times, our hidden people should be much more evolved than humans. That idea combined with them being representative of nature made us think, for example, that their imagined way of life could suggest solutions to the global climate crisis the world is currently facing.

What do you find is the most interesting aspect about the show?

The show is very interdisciplinary, using physical theatre mixed with aerial circus, acrobatics, contemporary dance and projection to tell a narrative story. We’re using circus artists to portray the hidden people, so they can glide and flow with ease around the stage, in contrast with the human characters that use bulkier equipment such as harnesses and climbing ropes to traverse our set, a 4 metre high and 10 metre wide wall. The wall represents both a dam that is being built in the Icelandic
highlands, as well as the mountainous landscape that the dam will flood when completed. Changes in scenery are then presented through projected visuals that help tell the story. We love mixing circus with theatre, so that we are able to tell a theatrical story that still contains some incredible circus skills to drive the story forward.

What do you hope audiences will take home after watching Hidden People?

We hope that our audience will have a new understanding of contemporary circus and how the unique feats of strength, agility and coordination can be used to tell stories in new ways. We hope that we inspire them in some way, whether that’s to have a discussion about our environmental impact in the world or to run away with the circus!